On January 1, snow and hail fell in the resort of Hurghada in Egypt; locals and tourists are sharing photos on social networks.

“In Hurghada, hail fell, with thunder and lightning, and lasted about 40 minutes,” a Russian residing there told RIA Novosti.

Snow quickly covered the roads and covered the parked cars. At the same time, due to bad weather, the country’s authorities announced the closure of schools on Sunday, January 2.

Locals and tourists alike were urged by the Egyptian leadership to stay away from trees, lampposts and billboards that could fall in the wind.

Heavy rains have come to the Sinai Peninsula, snowfalls are also expected in some areas of the region, the local portal youm7 notes.

Continued in the comments .. pic.twitter.com/8X2QRni2BF

Snow and rain continued in Hurghada for several hours, the city was covered with snow, the Egypt Times reported on the evening of January 1.

On Instagram, you can also appreciate the snowman made in Hurghada.

Some write that the hailstones were the size of a quail’s egg and damaged several cars.

Heavy hail in Egyptian #Hurghada. Roads of the resort town are covered with #snow and #hail.
In the social networks, #eyewitnesses wrote that the #hailstones were the size of a quail’s egg. The precipitation damaged cars and windows.#GlobalCrisis #ClimateCrisis #ClimateChange pic.twitter.com/8Tn1wCgFQY

The climate in Hurghada, as in almost all of Egypt, is tropical desert. Snow is extremely rare here. EU moves to label nuclear and gas energy as ‘green’ 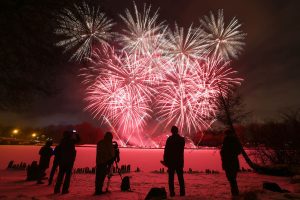 “We had a lot of fun, you bastards, we had a party.” Fireworks incidents for New Years New on Paramount Plus in January 2022: New Star Trek: Prodigy Ministry of Defence Recruitment 2022: Apply online for Trainee Engineer Posts at bel-india.in before 15 January 2022. Check here for salary and other updates The Matrix 4! Where to watch? – FilmyOne.com – Filmy One