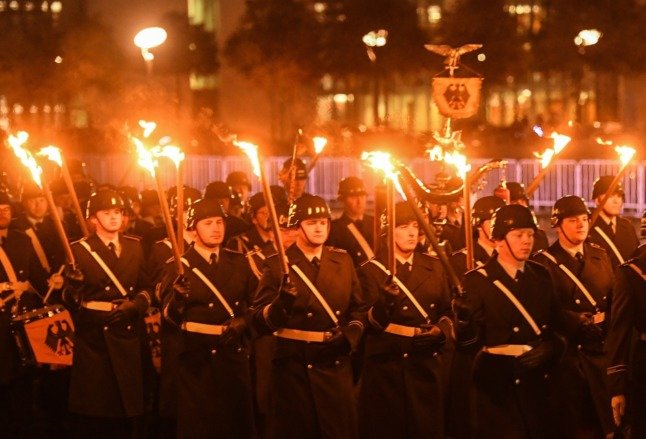 The Bundeswehr held a ceremony on Wednesday evening in central Berlin to honour the 90,000 soldiers who risked their lives while serving during the two-decade operation in Afghanistan.

But one part of the ceremony hit a nerve among sections of the German public.

Dozens of soldiers in uniform marched in lock step in front of the Reichstag building, carrying flaming torches.

For some, the visual parallels to a Nazi march at the Brandenburg Gate in 1933 made the parade too historically insensitive.

Here’s imagery you don’t see often: As part of a larger event to honour German troops that fought in Afghanistan, soldiers with torches march in front of the Reichstagpic.twitter.com/ahOUFVagIZ

Thousands of Twitter users posted with hashtags such as #Wehrmacht and #Ritual in which they said that the parade was not suitable for the modern age.

See also on The Local:

“When Germans carry troches I can’t eat enough to keep up with how much I’m vomiting,” wrote former Green Party politician Jutta Ditfurth.

Satirist Jan Böhmermann wrote that he finds “torchlight marches by uniformed people in front of the Reichstag really, really sh*tty regardless of what the cause is.”

I think torchlight marches by uniformed men in front of the Reichstag are really, really sucks. Regardless of the occasion.

But you can’t say that in public these days.

Wednesday evening’s ceremony was supposed to be about the sacrifices made by German troops. A total of 59 Bundeswehr soldiers lost their lives in Afghanistan.

The Tattoo – a march with torches – is the highest military ceremony the German army has.

The custom is used to honour German presidents and chancellors as well as defence ministers at their farewell ceremonies. Its origins do not actually lie in the Nazi era, rather they date back to the 16th century.

The ceremony always takes place in the evening, and consists of a procession, parade music – including the national anthem – and a military retreat. Torches are always part of the affair.

The Association of German Deployment Veterans defended the decision to hold the ceremony in front of the Reichstag.

The organisation said that “for an army controlled by a parliament, we can think of no better place than the seat of parliament to honour the service of the Bundeswehr and the sacrifices of its troops”.

Centrist politicians also came out in support of the military.

“The ceremony was absolutely appropriate in form, and it was held in the only appropriate place,” wrote Marie-Agnes Strack-Zimmermann, defence spokeswoman for the FDP.